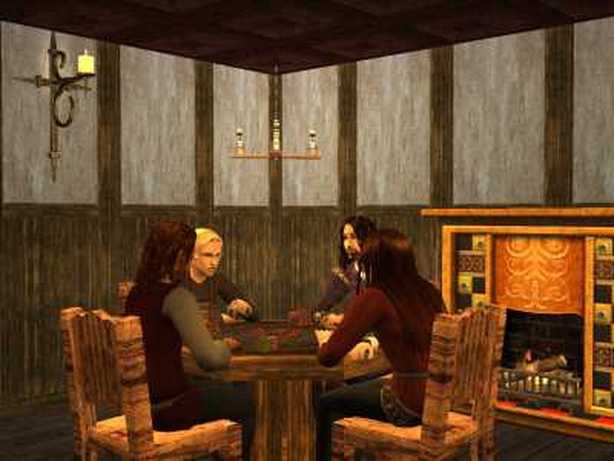 Harold, upper right, Thomas Littleton, lower right; Sebastian Vaughn, lower left; John Carpenter, upper left.
"Deal again, Vaughn."  Harold laughed, "and don't look so seriously there, Carpenter.  All is well w'ye.  We'll see you rich yet.  We shall!"
"This game is getting to be too rich for the likes of me, milord," John Carpenter returned, his blond locks trembling in the firelight.
"Nonsense, Carpenter.  Another round to feed your heart courage, I say!" 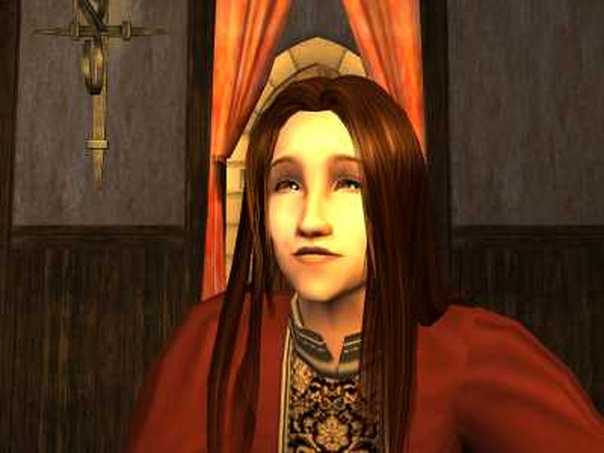 "Such is the wisdom that'll see you crowned monarch, Leo!"
"Aye, and such a lion-hearted King I'll be!"  Harold raised his glass and drained it in one draught.  "You'll see my wisdom clear enough Carpenter when I knight you for your courage in battle." Harold laughed heartily, "but first you'll have to see this game through!" 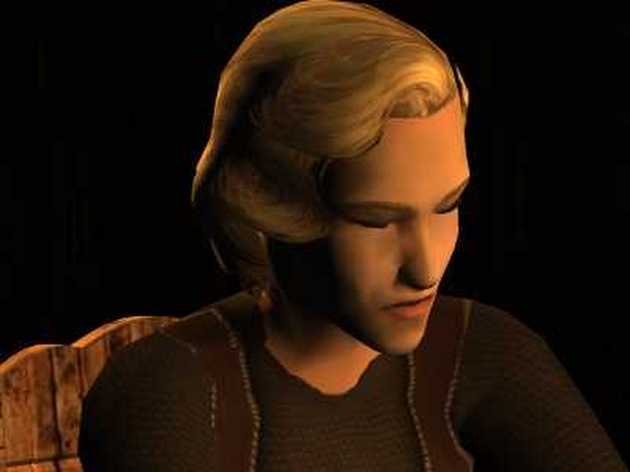 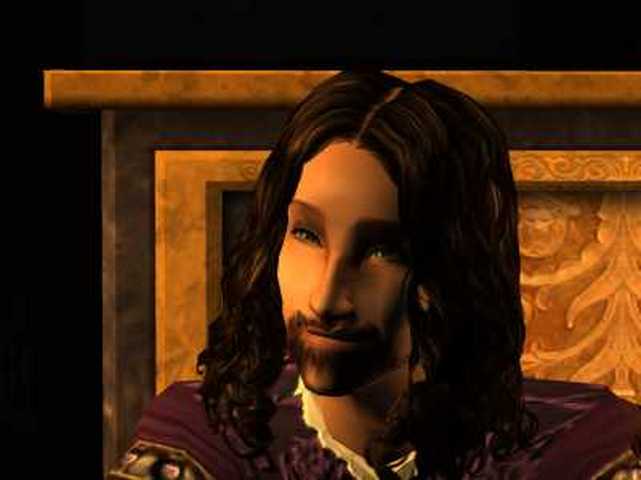 "My serious Carpenter, I like you.  You shall be Earl, indeed!  Natures of such deep gravity we shall much need.  You we shall first seize upon."
"Earl, milord?"
"Call me Leo, Lion of Warwick, if you must address me.  I say, bar maid, another round here for my serious friend."  Harold laughed infectiously, and swatted the bar maid on the bottom.  She turned and shot him a temptress's smile.
"Make that two rounds."  A man of twenty with curly brown hair motioned the innkeeper away who bowed with humble servility and withdrew quietly.
"Chesterfield, you've made it at last.  I say, are you still attending those interminable lectures on Greek art?  We've been waiting all the day for you." 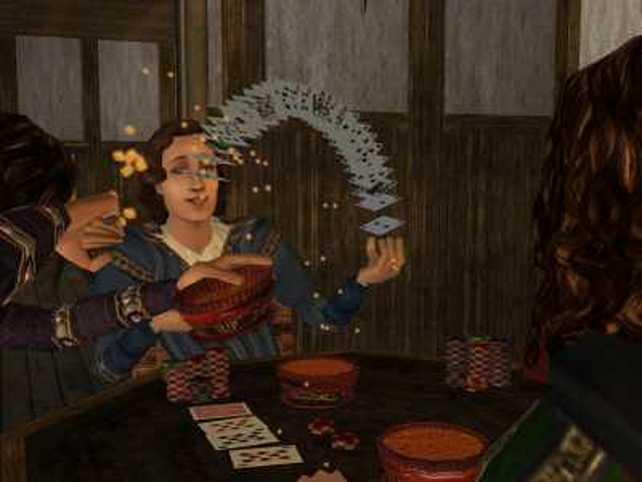 "Some of us have to keep up appearances, my dear Leo."  Chesterfield laughed merrily, picking up the cards.
"Finally someone who knows how to handle the cards!"  Dernier raised his glass to Chesterfield, who shuffled the deck in midair.
"Indeed.  I thought as much," Chesterfield countered, "Fancy asking that dolt Vaughn to deal! He's got the arm of a woman and his ale is more sour than pig's piss."
Everyone laughed heartily, their voices ringing merrily through the bar.
"Chesterfield, I say, where have we been all this time without you.  Lost indeed."
The bar maid returned with a tray of icy mugs.  Chesterfield threw his arm about her and buried his face in her ample bosom as she giggled uproariously.  "More pig's piss for'ye mi'lord?" She bubbled girlishly.
"Yes, my dear thing," Chesterfield returned, pinching her on her wide backside.
On her disappearance, Chesterfield became instantly composed.  He looked gravely around as he dealt the cards.  When he spoke, it was in even, measured tones.  "I have a confession, Leo."
"A confession?  Which of us here shall play Bishop?"  Harold jested, waving his mug in the air.
Dernier tipped his mug and smiled broadly, but no one spoke, and gravity was restored by a single, serious glance from Chesterfield.
"You may jest, Leo, but I haven't only come to play spades and jacks with you today.  Word has it that Edward is assembling forces to march on Amicouer.  If the conquest goes well, he'll have a clear route to Westsea."
"He can't succeed.  The Baron controls the fens with aquatic monsters.  His forces are inimitable."
For centuries, Havinia had been a landlocked country, with no route to the sea.  Every monarch since King Redwulf had dreamed of securing land passage to the sea to ensure trade with distant lands. So far, no attempts had been successful.  Though Applemere, a small barony in the south of Amicouer, had once been a friendly province of Haevinia, relations between Applemere and the other shires had become increasingly strained, until finally separation from the union was all but impossible to avoid.  Though no official secession had ever been recognized by any monarch of Haevinia, the ruling families of Applemere had severed all ties with Haevinia and declared themselves a sovereign nation.  Still, to anyone in Haevinia the highest lord in Applemere was titled the Baron Aquamarin'e, regardless of what he chose to call himself.
"Prince Edward has been studying the problem.  He has called in experts from distant lands.  He thinks he can overcome the Baron's forces and recapture Applemere, and restore relations with Amicouer."
"Ah.  My noble brother, always the perfect scholar.  What will father say when he finds defeat in the bogs of Elderberry like all of his forefathers before him?"
"That's just it, Leo.  He's got the King convinced that the plan will succeed.  Rumor has it they've brought in alchemists to solve the problem of crossing the bogs.  So, I've come with a proposition for you."  Chesterfield leaned back in his chair and took a deep draft from his mug.
"A proposition?  Sounds serious.  What is it?" It was clear Harold's interest was piqued.  "Perhaps you think we should seek a pilot to ferry us across the bogs this evening?"
Littleton coughed.  "Stop, Leo, you've nearly choked me to death here."  He removed a cherry pit from his mouth and dropped it on his plate.
"You're not far wrong, my dear Leo." Chesterfield's eyes glinted merrily in the late afternoon haze.  "But those plans shall have to wait, I fear.  For this evening, I propose we shall find some festivities."
"Now that sounds like a plan I can get behind!"  Harold thumped the table, shaking all of the glasses.  "What've ye got in mind, Chesterfield?"
Campion smiled, but looked confused as he waited for Chesterfield's explanation.
"None other than a ball, my friends.  Hosted by my Lord Aubergine."
"Do you mean the fellow with five daughters to marry?  The one who comes from a mysterious land?  What does he call it?  Eldermere?  Count me out.  None will come out of there bachelors."  Harold laughed, sending the whole table into an uproar again.
"That's just the idea, Leo," Campion declared with false exuberance.  "Think it over.  We've got gambling debts to settle.  And he's got daughters to settle.  Such an even trade, don't you think.  It's the perfect conspiracy." Campion shot Chesterfield a withering look.  "But I don't see what it's got to do with Applemere!" 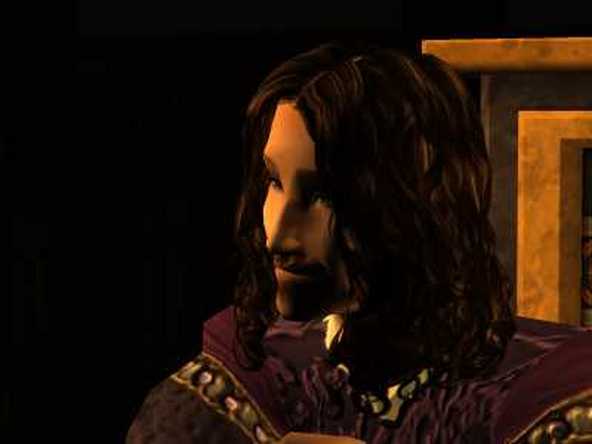 "Conspiracy?  Whatever do you mean?"  Harold shook his head almost imperceptibly, a rakish grin overspreading his face in the candlelight.
Chesterfield looked at Campion as if to say, "Trust me on this one," before continuing in the same confidential tone.  "Your father has cut you off, hasn't he?"
Though Chesterfield was speaking directly to Harold, everyone at the table nodded.  Carpenter, who hadn't spoken or taken his eyes off his cards for the entire duration of the conversation, looked like he was only just holding back tears.
"What's your point, Chester?" Campion countered evenly, a cold precision in his voice.
"Your brother has no heir, right?"
"None that I'm aware of.  Though there was that shepherdess in the valley."  Harold smirked, knowing his virtuous brother had never so much as looked askance at a peasant woman.
"Waiting still, for the point to emerge."  Campion scowled.
"Indubitably, your lordship," Chesterfield quipped, ducking Campion's half-hearted swipe.  "My point is simple.  Leopold, should you father a son, you'd be a step ahead of brother dearest.  And with Aubergine's money, your debts would be paid."
"That would have to make your father happy," Campion added wryly.  "But, my dear Chesterfield, I fail to see what any of this has to do with Applemere."
"Not the least of which is the scandal," Harold mused.
"Then it's settled.  You shall have one of them.  Which it matters little."
"Which is the wittiest?"
"Applemere?  What does it have to do with Applemere?"  It was clear that Campion would not give this line of reasoning up.
"Or the prettiest?"
"If you must know, Campion, I've discovered a connection between our dear Lord Aubergine and the inimitable Baron."
"Or the sweetest?"  Harold swung arms with Carpenter and sang.
"A connection?  What sort of connection?" Campion shouted over the singing.
"The Baron, it seems, is my dear Lord Aubergine's bastard."
At this revelation, the revelry ceased and a hushed calm fell over the table at once.
"You know this for a certainty?" Campion eyed Chesterfield severely in the silence.
"I do."
"How?"
"As I've said, you'll have to trust me.  My sources are confidential, but quite accurate."
"And does the Baron know his father?"
"He does.  The Baron knows Amicouer is the key to Haevinia's future.  He has been working to become legitimated so that he may inherit my Lord Aubergine's exapansive lands."
Harold laughed heartily, breaking the silence.
"But Aubergine has a son."  Harold countered laying down a royal flush, "and from what I've seen very little interest in combining the future of Amicouer with Haevinia.  My father has already tried to forge a match with his realm many times over.  It is out of the question."
"An infant son.  An excellent viceroy to your Majesty ... once you are crowned, milord."
"Careful Chesterfield.  Treasonous talk."  Harold gestured affably toward him, raising his glass.
"Perhaps.  But I hardly see how Aubergine can resist one so ... knowledgeable ... as you milord."
"So you mean you want me to persuade his lordship ..."
"I think, my dearest lord, you will find my lord Aubergine to be very moveable once you make him aware of how he may avoid scandal."
The logic went round the table faster than lightning, before returning to Chesterfield's conclusion,  "Yes, that is exactly what I mean.  You must see that you protect his lordship from the inconvenient Baron."
Silence fell again, as Harold's gaze bored into Chesterfield's brow.
"It's brilliant!"  he finally shouted, sending everyone into gales of laughter once more.
"But I do not see how this forestalls the problem of the impassable bogs."
"Oh, Thomas, my dear man.  You worry overmuch," Harold slapped him on the back.  "One step at a time, dear friend.  One step at a time!"


The innkeeper paused and refilled his pipe.  The light over the corn field had grown long and I realized I had spent the better part of the day in the adirondack chair.  I wasn't sure if I could feel my legs any more.  And a sudden desire to get up and move about came over me.  I ventured a question, against my better judgment.  "So he married one of the Aubergine maids?"
"He did."
"And which did he marry?" I asked, stretching my legs on the lawn.  They were stiff and wobbly.  I couldn't feel my left foot at all.
"The oldest."
"I mean, did he marry the wittiest, the prettiest, or the sweetest?"
"None of the above.  He married the oldest, as I told you."
Later, in front of the fireplace, the innkeeper resumed his tale.


The innkeeper set his pipe on the mantle.  For some moments, neither of us spoke.  Finally, I broke the silence.
"So, I guess that does answer my question, then."
"Your question?"
"Of how Haevinia became Warwick."
"Right.  It does."
"But. ...."  I was at a loss for words, and really wasn't sure how to continue.
"I suppose you'll be wantin' ta know more."
"Is there more?"  I had fairly forgotten about the conference, I must admit.  I was hoping he would agree to tell me what happened after Harold became King.
"Of course there's more. What do you want to know?"
"You said King Harold was a King of the People.  And you said he was a good man, but--" I paused, to gather strength for the next words that had to be spoken, "but, well, I'd like to know how he actually ruled.  If his people were happy."
I could see that I had offended my host.  I hadn't meant to, but those things needed to be said.
"I'll give you two weeks, Traveller.  And at the end of that time, if you don't see the way of King Harold being a good man, a King of the People, you're on yer way to the conference, hear?"
It seemed a reasonable deal to me.  By way of agreement, I stood, yawned and trudged toward the stairs.  Sleep came before I could welcome it.

Back to Prologue
Continue to Chapter 3