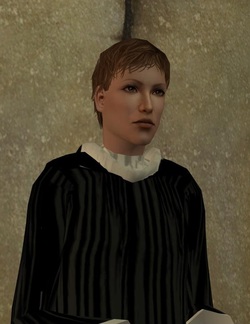 Biography
Frank Wright, born of devout parents, has always been an avid seeker of knowledge.  Very outgoing and highly sociable, as a child Frank preferred to spend most of his time playing and running out of doors, rather than to stay cooped up with his catechism as his severe, authoritarian father wished him to do.  Even though he found books dull, Frank was a curious child and was often scolded for his "cheek" in an attempt to stifle his natural skepticism.  At the age of eleven, Frank was sent to a parochial school where he learned to read Latin and Greek fluently, and where he was frequently rebuked by a strict schoolmaster, who believed the best teaching method was a hickory rod.
Through these school age years, Frank struggled through intense doubt to maintain his faith, and to find his voice in the Holy Church.  Though he always preferred oral debate to written argument, at the age of sixteen Frank produced his first theological tract, "In Defense of Dogma," which drew the attention and approbation of King Harold.  However, Frank is not a theologian, preferring always to study nature, rather than books.  Frank has always excelled in the study of natural philosophy, especially the study of astronomy and chemistry, subjects which seemed to hold nature's secrets.  Plagued by doubt as a young man, Frank often fasted and prayed to find peace from restless seeking, but his intense desire to understand the natural world never left him.  However, his thirst for understanding never lessened, and led him to more and more esoteric texts, including Agrippa and Paracelsus.  In secret, he wrote "A Seeker's Quest for Truth," a short tract advocating for the study of planetary influences on human behavior.  The tract spread like wildfire among radical intellectuals seeking for theological support.
To assuage his guilt for contradicting the mother church's position, Frank worked tirelessly among the poor and hungry in Shropshire, bringing spiritual comfort to many.  In these years, he became acquainted with Lady Anne Dernier, a powerful and influential noblewoman.  Lady Anne became impressed with Frank's unceasing drive to minister to the poor, and she donated great stores of food and quantities of clothing to his efforts, even speaking highly of him at court.  With Lady Anne's support, Frank was easily confirmed as a Priest of the Shropshire Church, Our Lady of Felicity in 1607.  Though he tried valiantly to curb his insatiable curiosity, Frank found it increasingly difficult to maintain his orthodoxy within the church and continued, often unwittingly, to spark controversy on theological issues with searching questions.  His sermons often left the simple people of Shropshire wondering and questioning, and frequently stirred up debates in the local taverns, as some townspeople seconded his progressive ideas, and others found them to be disturbing and even frightening.
In 1612, King Harold, on a long tour through the realm, stayed in Shropshire for the spring and heard Father Wright in his own church.  King Harold was intrigued by the young Father's noble interest in the natural mysteries, and found himself inspired by the cleric's discussion of nature's laws, especially his discussion of how every faculty of nature, even the lowest elements contain pure and noble qualities.  However, those closest to the crown, especially the conservative Lord Percival Dernier, believed Father Frank to be a dangerous influence, despite what his daughter-in-law, the Lady Anne, might say to the contrary.  Such suspicions led King Harold, against his true heart, to remove Father Wright from his post as Priest in late spring, 1612.
Shortly thereafter, Father Wright began holding dissenter's meetings in his small house on the edge of Shropshire, where he lived with the mysterious child, Lucita.  As membership grew, Father Wright, encouraged fellow soothseekers, for so they called themselves, to form a secret society of faithful students of nature.  The dissenting group began calling themselves The Veritas Society.  The group purchased a small farm for Father Wright to use as a parsonage and meeting house, and in the late summer of 1616, Frank took up residence there.