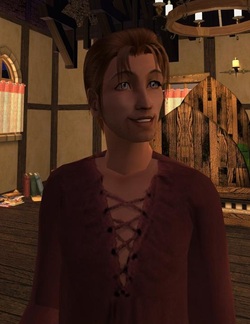 Robert de la Fleur is a wealthy merchant who arrived in Shropshire in the year 1590 with the first wave of Amicouevrian immigrants.  He is a very mysterious man whose manners and breeding suggest a high born heritage, but whose business sense and practical skill establish him as a solid competitor in local trade.  The de la Fleur name is unknown in Shropshire and rumor has it the name is fabricated to hide Robert's true ancestry.
A skilled tailor and florist, Robert quickly set up shop in downtown Shropshire and right away became a successful merchant.  Upon the creation of the Royal Crafters Guild, Robert was among the first to be invited to join, along with other long-established Shropshire merchants, many of whom declined the invitation.  Steeped in centuries old tradition and marked by a high pride in family heritage, the local Shropshire residents often find Robert's open sincerity and frank smile to be strangely disarming, and many have shunned him for his casual acceptance of new ideas and ways of doing.  However, not all are opposed to change, and Robert has taken a number of apprentices whom he has trained up according to the Acts of Regulation proposed by His Majesty, King Harold.